The remote, mountaintop village of Xinhua looked deserted as I and some team members pulled our vehicle to a stop at the edge of town. We soon discovered that almost the entire village had congregated at what might be called their “fairgrounds” to celebrate a festival called (according to the best translation I can come up with) the “Welcome the Wild Man Festival,” and we were just in time to join the party! (As the only foreigner there I wondered if some thought I was the wild man!) 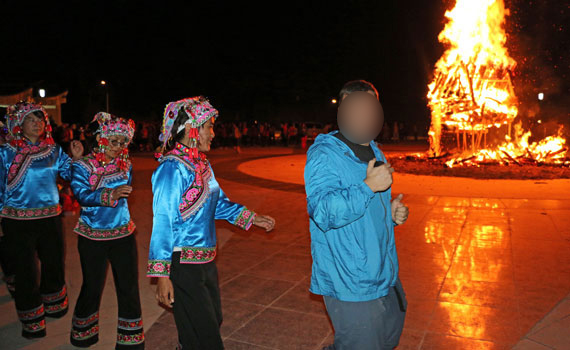 We traveled to Xinhua, deep in the mountains of Asia, to meet people of peace—those who are not necessarily believers but who are not hostile to the gospel, and who are, we believe, prepared by God to help open a door for the gospel into an unreached tribe. They in turn, we prayed, would provide an opening into a tribe called the Nisu.

We recently discovered the Nisu (considered unreached according the Joshua Project) speak the same language as the A-Che people with whom we’ve been working to reach for many years. Our team has translated and recorded select Bible stories and the gospel message in the A-Che language, with which we originally thought we could reach around 40,000 people, many of whom are illiterate. After learning that we can reach the Nisu with the same recordings we realized we could now possibly touch 240,000 additional souls!

In March my team and I set out to find the Nisu people. That’s when we crashed the Wild Man party. As it turned out, the festival was a great excuse for us to be in such a remote region, one that the government considers “sensitive.” Another blessing, thanks to our God working his perfect plan, was that we encountered a virtual buffet of persons of peace—nearly 5,000 people, including all from surrounding villages, had converged on Xinhua for this festival—many of whom we counted as new friends. We also left town with many invitations to come to their home villages!

At left, festival participants; at right, men sacrificing animals to the spirits of rocks and trees while wearing tribal clothing and skin paint (the priestly-looking guy in the center was also sporting a hands-free microphone attached to his left ear, no doubt a relatively recent addition to this primitive celebration!)

One of the persons of peace we met at the Xinhua festival was MeiLan, a woman who helped acquaint my team with the language, dress and locations of various Nisu settlements. When we first arrived in her town, however, we were unable to meet with MeiLan. Although initially a bit disappointed, we soon discovered that God was interrupting our plans so that, while we were waiting, we’d meet a passerby named Mr. Pu. One of our team, Pastor Paul Fang, struck up a conversation with the stranger. He soon learned that Mr. Pu had once heard the gospel and believed, but he was never discipled, experienced fellowship, or even owned a Bible!

There we were, thousands of miles from where Mr. Pu first met Jesus, participating in the plan of God in a remote town near the border of Myanmar. Mr. Pu told us how he’d been longing for instruction, so we invited him to join us for the entire evening. Pastor Paul encouraged him and gave him a Bible. To make this amazing story even better, Mr. Pu comes from the Lalu people, a tribe that is both unreached and unengaged (currently no known ministries working to reach them). We’re excited about one day carrying the gospel through the doors that will open into yet another tribe with no gospel witness, all because of our new connection with Mr. Pu, a person of peace!

Finally meeting up with MeiLan the next day, she took us to a mountaintop village to see some of her relatives. They were nowhere to be found, but this turned out to be a divine appointment once again! After realizing we weren’t going to find her relatives that day, we hiked up a path towards another group of homes. Along the way we met an elderly man named Mr. Zhu. He then invited us into his home.

Mr. Zhu, our new person of peace, began to tell us of the sacrifices his people make on the mountain to the spirits of the trees and the rocks. He described these rituals in great detail. As it turned out, Mr. Zhu was the village priest who actually made the sacrifices! Pastor Paul then shared several Bible stories with him in the A-Che/Nisu language. Mr. Zhu was so impressed with these stories that he wants to pass them on to the younger generation. Isn’t it amazing how God sent us to the top of the spiritual ladder in that region to build relationships and proclaim truth to those who have the influence to share it with many? All within the confines of communist China! 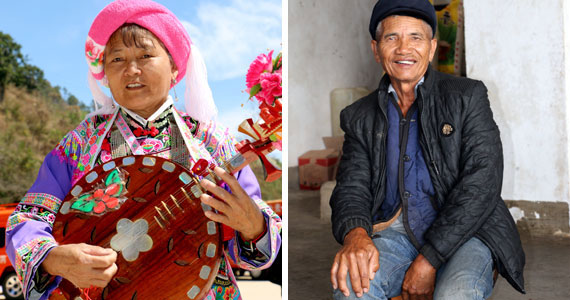 At left, a woman in traditional clothing playing a banjo-like instrument; at right, our new friend Mr. Zhu

Thank you for being one of our “persons of peace” for making this work possible through your gifts to His Feet International. Together we are taking the gospel to those who have never heard it before. Please pray for our gospel and Bible-story recordings to be widely distributed amongst the A-Che and Nisu. Pray for a mighty harvest to be reaped!